After India lost the must-win encounter against South Africa by three wickets in the ICC Women’s World Cup at the Hagley Oval, actor Anushka Sharma showed her support for the Mithali Raj-led side, saying the women in blue will always have her never-ending love.

Taking to Instagram Story, Anushka wrote, “The result did not go our way and was heartbreaking but what an exciting, enthralling match you fought right till the end girls.” 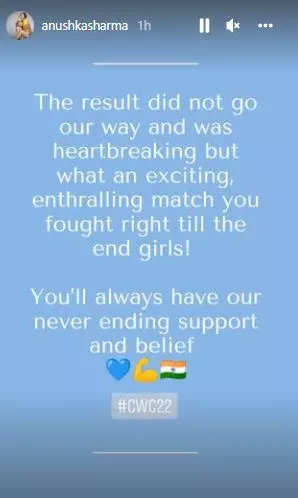 “You will always have our never-ending support and belief,” she added.

In the final over, South Africa required three runs off two balls and on the penultimate delivery, Du Preez was dismissed by Deepti Sharma but the Indian hearts broke as replays clearly showed Deepti overstepping the popping crease and it was deemed a no-ball. Eventually, South Africa won the match by three wickets.

Meanwhile, on the work front, Anushka is currently preparing for Jhulan Goswami‘s biopic titled ‘Chakda Xpress’, which will focus on the hardships and challenges the cricketer had to face to make a place for herself in the world of cricket.