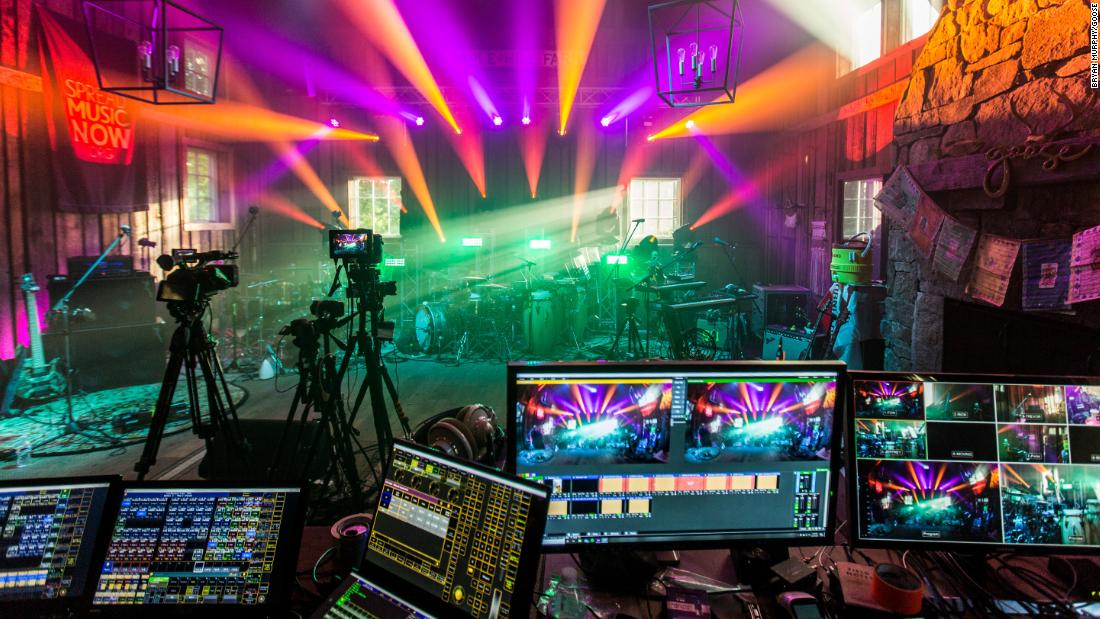 Ever since they began selling out shows throughout the Northeast last winter, the Connecticut jam band seemed destined for a fast-paced life on the road. But the coronavirus pandemic put an abrupt halt to all that when their national tour was canceled in mid-March.

Now, after three months in their respective bunkers, the four musicians are venturing back out. Virtually, of course.

For the next 10 days, Goose will be holed up at a barn in Fairfield County, where, starting last night, they’ll be broadcasting their unique blend of improv-inspired rock ‘n’ roll through eight sets of live music.

“Bingo Tour,” as Goose is calling the run, is one of a few new touring experiences that bands big and small have experimented with ever since the live touring industry all but shut down when Covid-19 began spreading in the US this spring.
Some acts, like Marc Rebillet, Garth Brooks and Spafford, have tried drive-in movie theaters. Others, like Dropkick Murphy’s and the Disco Biscuits, booked empty stadiums.
But for road warriors like Goose, who spend the bulk of their time playing small or medium-sized venues in cities across the US, growing their fanbase with every show, the next best thing they can do is play online and hope the fans show up.

“The demand for live, new content hasn’t really gone anywhere, in terms of what people want to see,” said Peter Anspach, who plays keys and guitar. “Maybe they’re not going out to a show, but we still found the demand for people watching new never-before-seen sets from the living room is just as big as a show.”

Twiddle, a Vermont rock band with 15 years of relentless touring behind them, is gearing up for a similar run. Theirs is “Roots Tour 2020,” and they’re promising nine sets of live music performed at various locations around their home state at venues instrumental to their career — all streamed live for fans to watch at home.

“This is going to be something really special for us and very excited to relive some of these special moments from our career,” Mihali Savoulidis, Twiddle’s guitarist and lead singer, said in announcing the event, which starts at $75 for the package deal.

Both bands’ virtual tours are being produced by Live From Out There, an online music & content series under the 11E1even Group that began producing concert streams in the early days of the pandemic.

“A lot of people are going up on Facebook Live just sitting on the couch with their acoustic guitar. We wanted to give our fans something that was way more engaging that replaced what a ‘tour’ is for us and our fans,” Live From Out There co-founder Dave DiCianni told CNN. “Goose, and every band that we work with, sort of came up with their own concept.”

A part of the challenge these bands face is trying to recreate the community experience that typically revolves around their shows on the road.

“Everyone’s home quarantining. All we want is to be connected,” said Ben Atkind, the band’s drummer, of the live Facebook Q&A’s they’ve tried in recent weeks. “Our fan base is very active, and out there, so we’re definitely making an effort to keep in touch — for their sake and ours.”

For Goose’s virtual tour, there will be a few more chances to connect.

Fans who bought tickets to stream the shows can play along as balls are pulled on the stream, each one dictating what song the band will play next, giving fans a chance to win prizes if those songs match their provided boards.

There will also be merch, VIP meet-and-greets with the band (over Zoom of course), and even a community talent show.

“That’s just a whole other element of randomness,” said Anspach. “It kind of makes it more entertaining for us, as well as the fans.”

Goose typically drafts out a set right before they take the stage, or lets the music take them where they want to go. But now? “We gotta go with the balls,” he said.

The question remains of what a period of retreat from the stage will mean for a band like Goose, whose momentum seemed to be unstoppable in the jam music world earlier this year.

Some might never make it through the other side. Other bands could change for good.

“Having space from things is really nice. There’s always a renewed energy when you come back, especially if it’s taken on purpose or not,” he said, adding that by having a little breath “improvisation goes to new places.”

Anspach agreed. “I feel like when we get back we’re going to have way more ideas and be much more inspired, and we’re going to appreciate the fact that we’re playing together so much more,” he said. “I’m definitely stoked for it.”

“I hope we change,” added Mitarotonda. “Because if it just stays the same for too long then it’s — it’s not good. The best bands, the coolest bands, change a lot. I hope there’s some elements of change.”