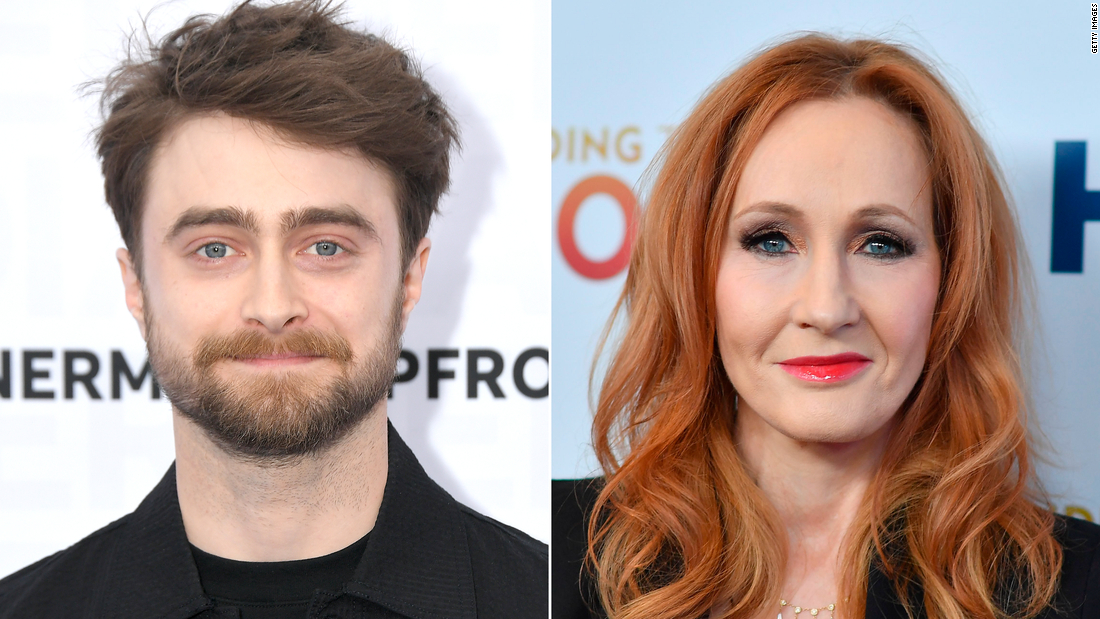 Daniel Radcliffe, the star of the “Harry Potter” franchise, on Monday responded to franchise creator J.K. Rowling’s controversial tweets about gender identity, directly addressing fans who may have felt pain reading the author’s comments, which some labeled as transphobic.

Rowling, who has often come under fire by the large Potter fandom for her social media posts, sparked backlash over the weekend after mocking a headline about “people who menstruate.”

“Hi @jk_rowling, using non-gendered language is about moving beyond the idea that woman = uterus,” Clue, a period-tracking app, replied. “Feminists were once mocked for wanting to change sexist language, but it’s now common to say firefighter instead of fireman.”
“What JK Rowling is saying is harmful and dangerous and the trans and non-binary witches and wizards deserve to feel welcomed and loved in the Harry Potter community dammit!!!!” actress Tessa Netting wrote.
Radcliffe, who doesn’t have a public presence on social media, wrote a heartfelt response to Rowling’s comments in a blog post for The Trevor Project, a non-profit devoted to suicide prevention among LGBTQ+ youth.

“Transgender women are women,” he wrote. “Any statement to the contrary erases the identity and dignity of transgender people and goes against all advice given by professional health care associations who have far more expertise on this subject matter than either Jo (Rowling) or I.”

Rowling has not issued an apology. Though in a follow-up to her tweet on Saturday, she wrote in quotes words that she had been called as part of the backlash, including “witch” and “TERF,” which stands for trans-exclusionary radical feminist.

She followed that tweet with a three-part thread of tweets in which she defended her earlier comments.

“If sex isn’t real, there’s no same-sex attraction,” she tweeted. “If sex isn’t real, the lived reality of women globally is erased. I know and love trans people, but erasing the concept of sex removes the ability of many to meaningfully discuss their lives. It isn’t hate to speak the truth.”
“The idea that women like me, who’ve been empathetic to trans people for decades, feeling kinship because they’re vulnerable in the same way as women – ie, to male violence – ‘hate’ trans people because they think sex is real and has lived consequences – is a nonsense,” she said in the second tweet.
“I respect every trans person’s right to live any way that feels authentic and comfortable to them,” she added. “I’d march with you if you were discriminated against on the basis of being trans. At the same time, my life has been shaped by being female. I do not believe it’s hateful to say so.

‘It’s clear that we need to do more’

Radcliffe began his post by asserting that his comments are not “in-fighting” between him and Rowling, who he wrote is “unquestionably responsible for the course my life has taken.”

“According to The Trevor Project, 78% of transgender and nonbinary youth reported being the subject of discrimination due to their gender identity,” wrote Radcliffe, who said he has been “honored to work with” The Trevor Project for the last decade. “It’s clear that we need to do more to support transgender and nonbinary people, not invalidate their identities, and not cause further harm.”

He then referred readers to The Trevor Project’s Guide to Being an Ally to Transgender and Nonbinary Youth, noting that he is “still learning how to be a better ally.”

The 30-year-old actor then specifically addressed fans of the Wizarding World, or “all the people who now feel that their experience of the books has been tarnished or diminished.”

“I am deeply sorry for the pain these comments have caused you,” he wrote. “I really hope that you don’t entirely lose what was valuable in these stories to you. If these books taught you that love is the strongest force in the universe, capable of overcoming anything; if they taught you that strength is found in diversity, and that dogmatic ideas of pureness lead to the oppression of vulnerable groups; if you believe that a particular character is trans, nonbinary, or gender fluid, or that they are gay or bisexual; if you found anything in these stories that resonated with you and helped you at any time in your life — then that is between you and the book that you read, and it is sacred.”

Radcliffe is not the only celebrity who voiced his opinions on Rowling’s tweet.

Katie Leung, who played Potter character Cho Chang, tweeted: “So, you want my thoughts on Cho Chang? Okay, here goes…(thread)” and then linked to a series of fundraisers for organizations that are working to promote the safety of black trans people.

Rowling has 14.5 million followers on Twitter, and her “Harry Potter” franchise has been celebrated for its messages of acceptance. However, over the years fans have expressed their disappointment in the author for her social media posts that sometimes project the opposite message.

In 2018, she came under fire for liking a tweet by a user that referenced “men in dresses.” A spokesperson for Rowling at the time told Newsweek the like “was a mistake.” “I’m afraid J.K. Rowling had a clumsy and middle-aged moment and this is not the first time she has favourited by holding her phone incorrectly!” the rep told the publication.

In December, Rowling disappointed the Harry Potter community after she expressed support for Maya Forstater, a woman who lost an employment tribunal over comments she made on social media about transgender people.

Forstater brought a claim against the Center for Global Development and CGD Europe, an international development think tank, after she lost her job as a researcher following comments on Twitter criticizing UK government plans to allow people to self-identify their gender. In a statement posted on Twitter, Forstater said she believes that “sex is a biological fact & is immutable.”
Rowling announced her support for Forstater on Twitter, writing: “Dress however you please. Call yourself whatever you like. Sleep with any consenting adult who’ll have you. Live your best life in peace and security. But force women out of their jobs for stating that sex is real? #IStandWithMaya #ThisIsNotADrill.”
The comments upset fans. “As a devoted Harry Potter fan who also happens to be transgender, it was like a punch in the gut,” author Jackson Bird wrote in an op-ed for the New York Times in December of 2019. “Through her books, Ms. Rowling helped teach a generation the power of not just tolerance, but fierce acceptance and unconditional love.”

“JK Rowling continues to align herself with an ideology which willfully distorts facts about gender identity and people who are trans,” the organization wrote. “In 2020, there is no excuse for targeting trans people.”
“We stand with trans youth, especially those Harry Potter fans hurt by her inaccurate and cruel tweets,” GLAAD added.

CNN’s Rory Sullivan and Kathryn Snowdon contributed to this report.