Deepika Padukone is making India proud as a jury member at the ongoing, prestigious Cannes Film Festival. During a press conference with her fellow jurors, the actress was asked to share how she would critique films that will be screened at the international film festival. 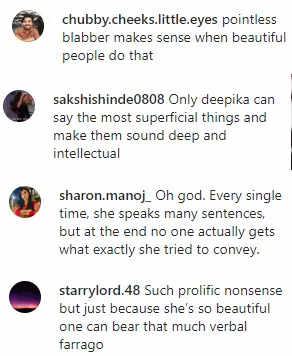 Speaking about her role, the actress had stated, “I think we are all aware of the fact that it is a huge responsibility. But, I think, we have also made a promise to each other yesterday that we are not going to burden ourselves with that responsibility. I think the idea is to remind ourselves of that audience, or of that young child who’s grown up watching movies and been inspired. I think cinema is such a powerful tool, such a powerful medium, it has the power to impact and touch people’s lives. So I think to we are going to forget for the next two weeks that we actually have this burden and responsibility and actually just enjoy the creative process that we are all here to do. I think we are all creative people and I don’t think anyone of us have the capacity to judge or to critique or criticise.”

Deepika’s response left netizens confused and puzzled. Commenting on a clip of her statement, one user wrote, “Such prolific nonsense but just because she’s so beautiful one can bear that much verbal farrago.” While another commented, “Oh god. Every single time, she speaks many sentences, but at the end no one actually gets what exactly she tried to convey.” One Internet user wrote, “Only deepika can say the most superficial things and make them sound deep and intellectual.”

As a jury member at Cannes, Deepika Padukone is part of the committee which will jointly decide which movie will take home the Palme d’Or.