Bollywood actor Deepika Padukone who was out and about shooting for her upcoming ‘Pathaan’ with Shah Rukh Khan and John Abraham in Spain, is now back in Mumbai. She was snapped arriving at the airport today after a quick trip to Dubai.

At the airport, Deepika kept cameras clicking in a chic airport look. She opted for a white top, paired with oversized denim pants and added a brown overcoat to put it all together. She accessorised the whole look with a pair of black sunnies and her plush arm candy as she flaunted her infectious smile for the shutterbugs.

On her way home, Deepika also clicked an aerial view of the ‘bay from her Dubai flight and captioned it, “Home”.

Meanwhile, a goofy picture of Deepika photobombing her team in Spain during the international shooting schedule has also surfaced on the internet. 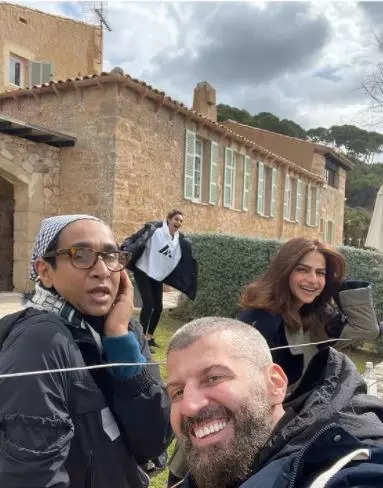 Earlier, it was Shah Rukh Khan who had reached the maximum city after wrapping up the Spain shoot where he shot for a special song with DP. Several pictures of the two from the sets had previously gone viral.

‘Pathaan’ marks Deepika and Shah Rukh Khan’s reunion. Helmed by director Siddharth Anand, it is slated to hit the bigscreen on 25 January 2023.

“We have the most loved superstar of our generation, Shah Rukh Khan, with us. It is an honour and a responsibility for all of us. So, we really can’t misstep at any point and we ensured that this video was bang for the buck for everyone who was eagerly waiting for SRK to announce ‘Pathaan’! Add to that, we have the biggest female superstar of our country, Deepika Padukone in the film. This makes ‘Pathaan’ even more exciting as SRK and Deepika have delivered historic blockbusters,” Anand had previously said in a statement.