Samantha Ruth Prabhu recently shared a picture of Rihanna flaunting her baby bump in style in her latest photoshoot for a magazine. The actress captioned it, ‘Legendary’, followed by fire emojis. 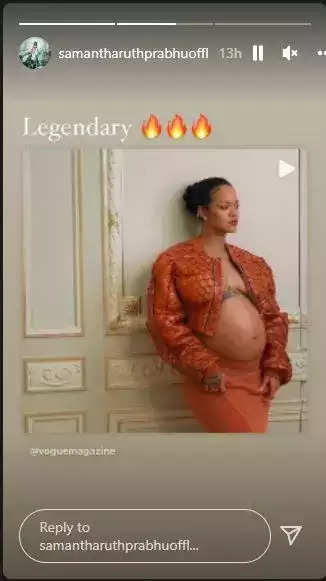 Dressed in an orange coloured outfit, Rihanna is seen striking a stylish pose for the camera. Rihanna announced her pregnancy in late January this year.

Talking about her pregnancy, Rihanna told the magazine in an interview that when she found out she was pregnant, she thought to herself she is not going to go shopping in the maternity aisle. The singer had decided that she is not going to let that part disappear just because her body is changing.

Elaborating further, Rihanna added that she is hoping they can redefine what’s considered ‘decent’ for pregnant women. According to her, her body is doing incredible things right now, and she is not going to be ashamed of that. The singer added that this time should feel celebratory.

On the work front, Samantha was last seen in a song number in ‘Pushpa’. The film starred Allu Arjun and Rashmika Mandanna in lead roles.