Superstar Shah Rukh Khan is all set to be seen on the big screen after a long time. His most anticipated film ‘Pathaan’, directed by Siddharth Anand, will hit the theatres in January 2023. The film also stars Deepika Padukone and John Abraham in key roles. Recently, SRK made headlines after he sent a handwritten note to a crew member from the film.

He sent the letter to Abhishek Anil Tiwari, who is an assistant director on the film. The letter was reshared by Abhishek on his Instagram story. In his caption, he wrote that he’s ‘speechless’ after receiving it from the man himself. The letter has Al Pacino’s name written on it.

SRK wrote, “To Abhishek, Thank you for making Pathaan. Such a wonderful experience for all of us, especially me. You are a gem my man. The hard work, efficiency, and smiles with which you pulled off such difficult work is much appreciated. Also I love the fact that you love your drinks man. Have a good life in cinema- will miss u lots.” He ended his letter by writing ‘love’ and his signature. Have a look: 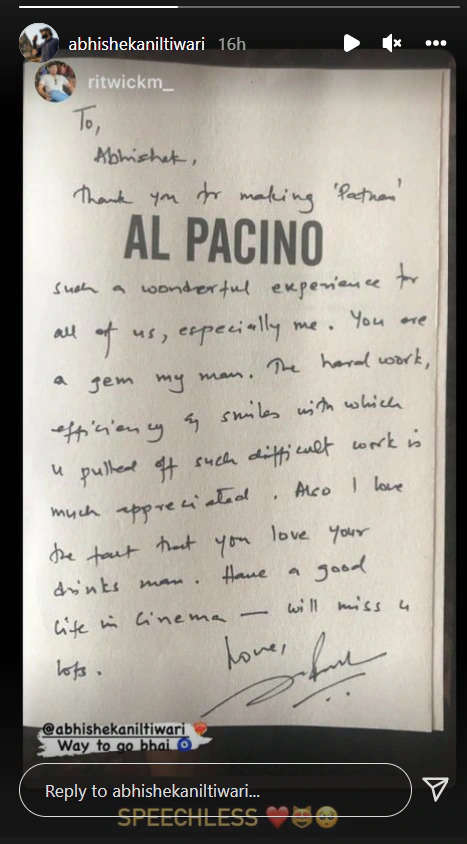 Soon after the letter was shared on social media, SRK’s fans were seen showering love on the actor for his sweet gesture.

Meanwhile, Shah Rukh recently stormed the internet after he shared his first look from ‘Pathaan’. He was seen showing off his toned physique and washboard abs along with his man-bun. He recently returned back to Mumbai after shooting in Spain with Deepika.

Apart from ‘Pathaan’, SRK is expected to be seen in Atlee’s next and Rajkumar Hirani’s untitled project.